Louise Carrier (1925-1976) is a Canadian painter (Quebec) known for his portraits. She was born in Lévis. Its considerable production includes oils, charcoal drawings and sanguine. Drawing and inks were particularly prized by the artist. She studied at the École des Beaux-Arts de Québec with professors Jean-Paul Lemieux, Jean Dallaire and Simone Hudon. She was also the recipient of a grant from the Canada Council for the Arts in 1969. The house she lived from 1966 to 1974, a former Anglican rectory became later an art gallery. (The latter is located behind the auditorium The Anglican on Wolfe Street in Old Lévis, and is a member of the Coalition of museums Chaudière-Appalaches). 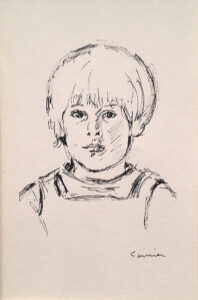