In 1929, he began painting, and teaching art for the next 28 years. He taught at the École des arts et métier at the Montréal School Board and Ville Sainte-Foy. He has exhibited portraits and landscapes at the Royal Canadian Academy of Arts, Montréal Museum of Fine Arts and importants galleries in Québec , Canada and abroad. He has painted in France , England and Italy notably in the Vatican gardens. Retrospective of his work: Université Laval (1988) and Villa Bagatelle, Sillery (1991). He participated in Toronto and Montréal at the 1st exhibition of the Québec members of the Royal Canadian Academy of Arts (1991), of which he is a member since 1946.

Francesco Iacurto’s work can be found in private and public collections around the world, the Musée National Des Beaux Arts, the National Gallery of Canada, The senate in Ottawa, Québec parliament, City of Québec, etc. 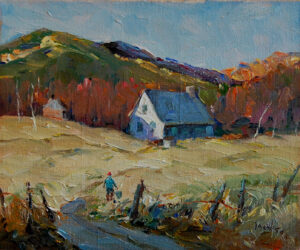