Viewing her paintings in 1964 the critic Dorothy Pfeiffer commented “ Colourful, stencil-like, paintings climb like exotic vines, or else soar like flights of birds of paradise. Everything moves, flies, rises, or flaps loudly in Gervais’ paintings. But nothing – absolutely nothing – flutters. In fact, the dominent note in her technique is ‘power,’ a power both authoritative and invigorating.” She spent much of her time in the solitude of the woods and lakes in the Laurentians. 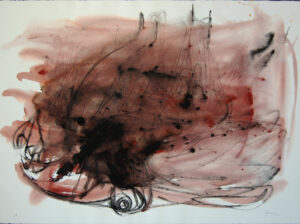