Marcelle Ferron was born in Louiseville, Québec in 1924; she passed away in Montréal in 2001. After being expelled from the École des beaux-arts in Québec City, where Marcelle Ferron had studied with Jean-Paul Lemieux, she settled in Montréal and became friendly with the artists in the Automatiste movement, who were moving their painting in an abstract direction. A signer of the 1948 Refus global manifesto, along with Paul-Émile Borduas, Jean Paul Riopelle, Françoise Sullivan, Pierre Gauvreau, Fernand Leduc, Marcel Barbeau, and others, Marcelle Ferron established herself as one of Québec’s most important artists in the modern era. Works by Marcelle Ferron are included in the exhibition The Automatiste Revolution: Montreal 1941–1960, organized by Markham, Ontario’s Varley Art Gallery, where it was presented in 2009 before travelling to Buffalo, New York’s Albright-Knox Art Gallery in 2010, Edmonton’s Art Gallery of Alberta in 2012, and Saskatoon’s Mendel Art Gallery in 2013.In its resplendence, the body of  his work  show perfectly embodies the inexhaustible creative energy that drove this key figure in the history of modern Québec art.

In 1953, she moved to Paris, where she worked for 13 years in drawing and painting and was introduced to the art of stained glass, for which she would become best known.

One of her stained-glass windows is at Champ-de-Mars metro station in Montreal. It was one of the first non-figurative works to be installed in the metro, in defiance of the didactic style present in other works of the period, and signalled a major shift in public art in Montreal between the policies of then art director Robert Lapalme and future art director and fellowautomatiste Jean-Paul Mousseau. Other examples of her works can be seen at Vendôme metro station, Hôpital Sainte-Justine, and the ICAO headquarters, in Montreal; the Place du Portage in Gatineau, Quebec; and the Granby, Quebec courthouse., m ferron, feron, refus global, simon blais, riopelle In 1983, she was awarded the Paul-Émile-Borduas medal for the visual arts by the government of Quebec.[1] In 1985, she was made a Knight of the National Order of Quebec and was promoted to Grand Officer in 2000. She was a member of the Royal Canadian Academy of Arts.[2] 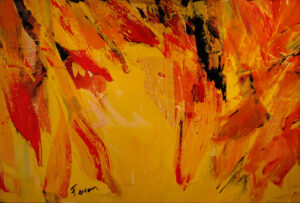